Who is Toby Johnson?

C. Tobias M. Johnson, known to all who knew him as Toby, was born in San Francisco on June 5, 1917. Toby was a year old when his father died in 1918. He and his mother moved to Courtland to live with his grandparents who had farmed there since the 1890s. He lived most of his lifetime in the Sacramento and Franklin areas.
After the death of his grandmother in 1921, Toby, his mother and grandfather moved to Sacramento. Toby attended Sierra Elementary School and graduated from Sacramento High School in 1934. He entered Sacramento City College, was awarded an Associate of Arts degree in 1936, and then attended the University of California at Berkeley.
He worked for the Ford Motor Company and served in the U.S. Marine Corps. Upon his discharge in 1945, Mr. Johnson accepted employment as a training officer with the Veteran’s Administration, and later entered into private enterprise with Rheem Manufacturing in marketing and sales.
In 1949 he decided to finish his education that had been interrupted by marriage and World War II. He enrolled at Sacramento State College where he earned a Bachelor of Arts degree in Education and became credentialed to teach in both elementary and secondary schools. He was also awarded an administrative credential, and in 1957 he completed his Master of Arts degree in Business Administration.
From 1949 until 1978, a period of 29 years, Toby Johnson was a teacher, principal, personnel director, and superintendent in the local districts of Franklin, Arden-Carmichael, San Juan, Galt, and Arcohe, and a Colorado school district. He served as principal of Arden, Jonas Salk, and Galt middle schools, and Mira Loma High School. When he was superintendent of the Arcohe School District in 1978, he was elected to the Sacramento County Board of Supervisors and retired from education to serve full time as 5th District Supervisor.

The 5th District of Sacramento County consisted of 569 square miles at the time, the population was about 225,000 and there were several distinct communities. The district was recognized statewide and nationally for the multiplicity of crops and agricultural products that were produced on its farms and ranches. In addition, industrial and business corporations and military installations were included in the area.
Mr. Johnson served on a variety of boards and commissions during his 16 years as a Sacramento County supervisor: Local Agency Formation Commission (LAFCO), Sacramento Employment and Training Agency (SETA), Sacramento Area Council of Governments, Sacramento Transportation Authority, Sacramento Area Flood Control Agency, Delta Protection Commission, Sacramento Cable Commission, Solid Waste Commission, Mather Internal Study Team, Sacramento Public Library Board, and Sacramento-Yolo Port Commission.

Supervisor Johnson represented the county at many district hearings and meetings in the 5th District, the county, the state legislature, and at federal offices in Washington D.C. He was a participating member of the budget and finance committee of the National Association of Counties and the County Supervisors Association of California.

A resident of Franklin since 1949, Mr. Johnson lived on the ranch he bought there nearly 50 years ago and remained an active member of the community until his death at the age of 97 in November, 2014.  Toby Johnson is survived by his daughter, Sue Kuhn; three sons, Jeff, Thad and Matt; 11 grandchildren; and five great-grandchildren.

This biography was prepared by Elizabeth Pinkerton for the Elk Grove School Names Committee from material provided by the Johnson family, October 1996. 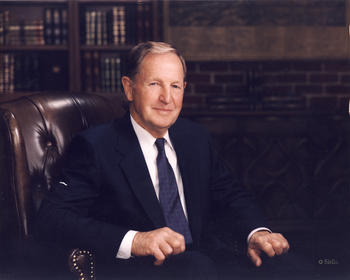